Vanessa received her first dose of Pfizer vaccine last November 9th. She began to experience throwing up and paralysis on her face five days later. She was then diagnosed with Bells Palsy, the Covid world reported. After being given corticosteroids treatment (an anti-inflammatory), her condition got worsened. She was hospitalized at the Regional Hospital in Araranguá where she was intubated. She was then transferred by the Specialized Aeromedical Rescue Service, from the State Department of Health of Santa Catarina to the Joana de Gusmão Children’s Hospital in Florianópolis on Jan 2nd. Some reports said Vanessa suffered an ischemic stroke.

TRENDING: BOMBSHELL: Veritas Documents Reveal DC Bureaucrats Had Evidence Ivermectin and Hydroxychloroquine Were Effective in Treating COVID — BUT HID THIS FROM PUBLIC

According to Alice, mother of 13-year-old V.M.F., the young woman began vomiting and paralysis on her face five days after taking the first dose of the Pfizer vaccine, applied on November 9.

She was then taken to the doctor, who diagnosed her with Bell’s palsy (paralysis on one side of the face), which can be caused by viral infections or immunological conditions, in which the body’s defense system ends up attacking the body itself. After treatment with corticosteroids, the symptoms worsened and the girl began to present a picture of muscle weakness, talking and walking slowly. Alice then sought care at the Araranguá Regional Hospital.

Portal Agora followed the case of the adolescent, and according to the HRA Nursing Management, she was admitted to the hospital unit on December 21, underwent consultation and was released. On the 29th, after a worsening in her health condition, she was again seen in the hospital, presenting respiratory depression. She was intubated and transferred.

The teenager was transferred on Sunday, the 2nd, to the Joana de Gusmão Children’s Hospital in Florianópolis, where, according to her mother, after several tests performed an infection was detected in her daughter’s brain, but without a defined cause. “The doctor said they were treating her with antibiotics, but that they were not managing to lower the fever. My daughter’s blood pressure began to drop; they tried all night, but during the morning her condition worsened, so they called me in the ‘salinha’ and said that nothing else could be done, because the infection hit an important part of the brain. At 10:15 a.m. my daughter passed away,” said the mother, stating that her daughter had no health problems. “My daughter has always been healthy and is now dead and no one has found the cause,” Alice said.

The Directorate of Epidemiological Surveillance (DIVE/SC) said in a statement that the case is now under investigation.

“However, considering that the notification of any AEFI must occur within 30 days of receiving the vaccine, it is necessary to evaluate this information with caution, because death may be associated with other causes and not necessarily with the vaccine,” the note concluded.

Got any tips? Email us at [email protected]. Please follow our Telegram channel to get the latest news updates: https://t.me/gatewaypunditofficial

Will This Be the End of the Great American Experiment? Democrats’ Efforts to Pass ‘Right to Cheat’ Bill Will End Free and Fair US Elections Forevermore – Here’s What You Can Do…

Former NBA star John Stockton, Gonzaga University’s most famous alumni, has had his season tickets revoked by the school because he won’t wear a mask at home games.

The famed Utah Jazz point guard recently told the Spokane, Washington, Spokesman-Review that the school canceled his season tickets because he refused a demand that he wear a mask because, as a prominent spectator, his mask refusal is conspicuous.

#Gonzaga has suspended the season tickets of its most prominent alum, John Stockton, for failing to comply with the school’s mask mandate.

What’s next for Stockton and his alma mater?

“I’m sure we’ll get through it, but it’s not without some conflict.”https://t.co/4l5ZI03Cdl pic.twitter.com/8BsjBbc5Au

“Basically, it came down to, they were asking me to wear a mask to the games and being a public figure, someone a little bit more visible, I stuck out in the crowd a little bit,” Stockton said. “And therefore, they received complaints and felt like from whatever the higher-ups – those weren’t discussed, but from whatever it was higher up – they were going to have to either ask me to wear a mask or they were going to suspend my tickets.”

Stockton reported that Gonzaga Athletic Director Chris Standiford let him know of the school’s decision to bar him from the stadium. Still, he also noted that several officials had asked him to wear a mask. 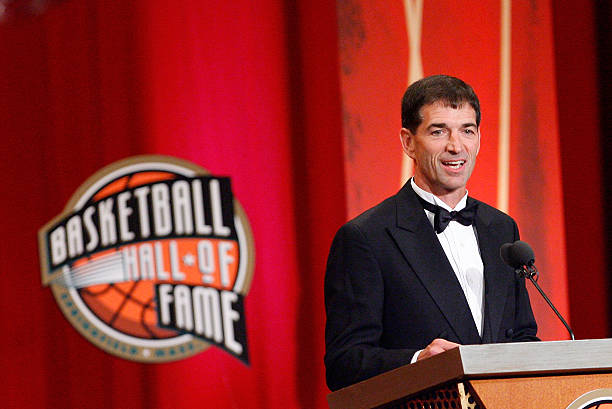 SPRINGFIELD, MA – SEPTEMBER 11: John Stockton is inducted into the Naismith Memorial Basketball Hall of Fame during an induction ceremony on September 11, 2009, in Springfield, Massachusetts. (Photo by Jim Rogash/Getty Images)

Standiford would not comment on the situation with Stockton but did say that the athletics department is only adhering to rules set forth by the school and the state. Standiford also cited the closing of concessions as an example of the school’s efforts at COVID mitigation.

Gonzaga President Thayne McCulloh also noted that masks are required, telling the paper, “it is imperative that we commit to wearing face coverings while in indoor, congregate settings. Masks are required in all classrooms, labs, and common areas such as offices, study lounges, hallways, library spaces, and places where others are present (with obvious exceptions, such as dining and certain fitness center activities). Students, ticket-holders, and all those attending basketball games at McCarthey Center and sporting events indoors are required to wear masks at all times.”

Stockton did say that while the masking and vaccination demands have put stress on his relationship with the school, he does not consider it a deal-breaker at this time.

The famed NBA player is known as a vaccine skeptic. Even in the Spokesman-Review interview, he claimed that more than 100 pro athletes had died immediately after being vaccinated. He also said that tens of thousands have died from taking the COVID vaccine.

The CDC claims it has received reports of 11,468 deaths of Americans in the weeks following vaccination. However, the agency has not determined if any of those deaths are related to the various coronavirus vaccines themselves or are from other causes.

Numerous Minneapolis restaurants are suing Democrat Mayor Jacob Frey over the city’s vaccine mandate that went into effect on Wednesday.

The mandate, issued on January 14, requires that “everyone entering an establishment that serves food or drink in Minneapolis must show proof of either being fully vaccinated against COVID-19 or having a negative PCR or antigen test taken within three days.”

Seven establishments have filed a joint lawsuit against Frey’s order, according to KMSP. The complaint was filed Thursday in Hennepin County Fourth Judicial Court.

The complaint, obtained by KMSP, states the order “is calculated and purposed to attempt to prod the general public toward vaccination.”

The lawsuit later reads in part:

48. Minneapolis bars and restaurants are being used as pawns to further Mayor Frey’s agenda of pushing for and convincing the public to get vaccinated. Whether the end being sought is noble, the scheme is forcing restaurants and bars to lose additional patrons and business that have already been reduced over the past two years and incur new costs and burdens to enforce the requirements of Emergency Regulation 2022—5.

49. These actions constitute misuse of mayoral power aimed to further at best long-term public health policy, and at minimum personal agenda item of Mayor Frey, and are certainly not the intent or purpose for which the emergency powers outlined in Minneapolis Code of Ordinances §§ 128.50 or 128.60 or Minn. Stat. 12.29.

One of the attorneys representing the plaintiffs, Francis Rondoni, spoke with KMSP regarding the lawsuit.

“Jacob Frey does not have the power to do what he did. You cannot just act by edict or fiat, as they say. There’s a legislative process that has to occur and he bypassed that,” Rondoni said.

Rondoni made clear to the outlet that his clients are not against vaccinations, adding they want to be treated the same as other Minneapolis businesses.

“To put bar owners in a situation where they are arguing with patrons about whether they can get in or not is also a safety issue,” Rondoni stated.

Mayor Frey’s approach is straightforward: keep our hospitals from being overwhelmed and keep our valuable small businesses open. That is precisely why he moved forward with this temporary and flexible approach in anticipation of the rising case numbers and hospitalizations. Doing nothing in the face of clear public health data was not an option.

“A hearing on a temporary restraining order is scheduled for Monday,” KMSP reports.

Dr. Robert Malone, inventor of modern mRNA vaccine technology, issued a stark warning to parents in America and across the world about vaccinating their children for COVID-19 during a powerful speech at the Defeat the Mandates Rally in Washington DC today.

Banned-yet-popular mRNA vaccine technology inventor Dr. Robert Malone issued a grave warning to American parents today who are considering vaccinating their children for COVID-19 during a powerful speech in front of thousands of protestors at the Defeat the Mandates Rally in Washington DC.

Malone warned that the controversial COVID-19 vaccine injections can cause permanent harm to American children, urging parents to get informed about the risks before making the decision for their child.

“As a parent, those that are parents or going to be parents, it is ultimately your responsibility to protect your children. If they’re harmed by these genetic vaccines, you are the one who will have to take care of them. And you will carry the burden for the rest of your life and theirs. On average, between 1-in-2000 and 1-in-3000 children that receive these vaccines will be hospitalized in the short-term with vaccine-caused damage. Only the passage of time will we know what long-term damage may occur to these children,” Dr. Malone said.

“The vaccines do not protect our children from becoming infected with Omicron. They do not prevent infected children from infecting others. In contrast, the pharmaceutical companies and the government are almost fully protected from any damages these products might cause them.”

“If your child is damaged by these vaccines, you will be let alone with both your grief and the burden of care. These genetic vaccines can damage your children,” Dr. Malone said.

“They may damage their brains, their heart, their immune system, and their ability to have children in the future. Many of these damages cannot be repaired,” he continued. “So I beg you, please get informed about the possible risks. Your children may be damaged by these experimental products.”

Are you getting vaccinated?